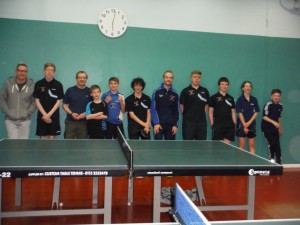 Haworth Hawks Table Tennis Club held a sponsored 24-hour Table Tennis Marathon 6pm Friday 29th April to 6pm Saturday 30th April. The event was a magnificent success with nearly £1,300 being raised. This will enable us to buy scoreboards to develop umpiring at the club and also starts off a Junior Development Fund to allow us to invest in the future of our juniors with subsidised courses for them to become coaches when they reach sixteen.

See our picture gallery for more photos of the night and day.

The first recipient of monies from the fund for a Coaching Course will be Nathan Ward who has been part of the club since the age of 7, is a junior committee member for the Keighley & District League, and has already been helping out with some coaching activities at the club, but also with table tennis at Bradford Hawks and at Parkside school.

Some highlights from the 24 hours :

36 juniors took part in some way, with the support of adults doing coaching, chaperone duty, donating pizzas, bacon butties, pretzels, doughnuts, buns, other snacks and raffle prizes at crucial points to keep us all going.

8 juniors got through the night to the half way point, but only Spencer Hurd managed the whole 24 hours without a cat nap.

Altogether the juniors did a total of 300 hours (awake) and a few more where they were there in body.

Coaches Paul Bryant and Judith Silberberg were the most outwardly lively adults throughout, but Paul gets the prize as he also still had a pot on his leg!

It has been wonderful seeing what can be achieved when the Table Tennis community comes together but was hard work trying to think of something else to do after already running through nearly everything on the plan in the first 6 hours.    There were lots of mass round the worlds, a hard bat tournament, top table, sitting table tennis, beat the robot, obstacle race, trick shots, hula hooping whilst balancing a ball on bat, unusual racquets, but also footwork/reaction tasks with skipping, football and sidestep quick baseball. Several juniors were still able to successfully complete the Junior Umpire Award questionnaire after being awake all night, and a few passed another level on the Butterfly skills pathway (including a couple of adults that got their Starter Silver & Gold).

Some quotes for the best bit versus worst bits of the event: